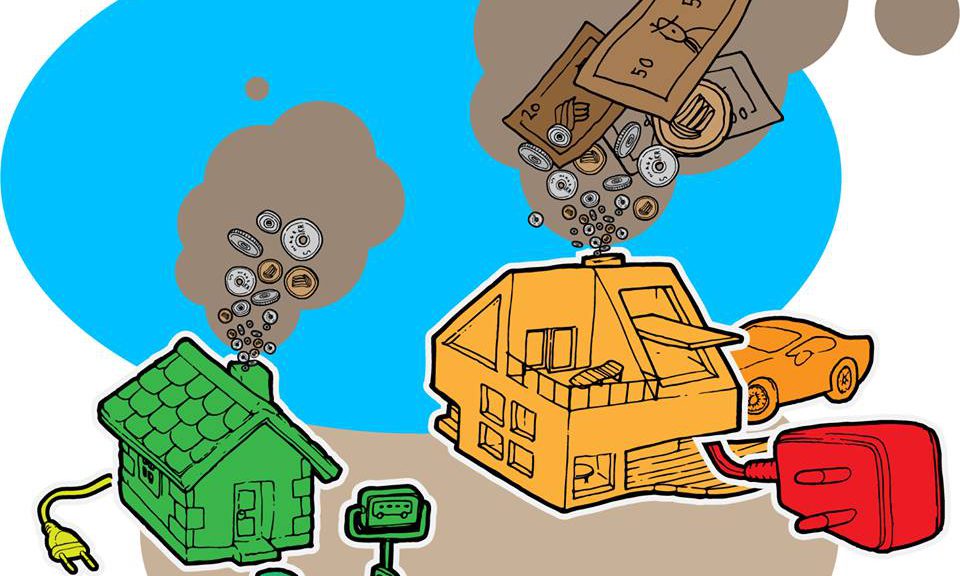 Henry switches off the light when he leaves a room and closes the water tap while brushing his teeth. Neither action costs him much effort. Actually, at the end of the month, it costs him less money. As such, both conscience and wallet are similarly satisfied. He also recycles of course; everyone does that, it is not that difficult… Even though sometimes when standing in front of the many bins he is confused as to if the trash in hand is actually plastic, paper or regular waste. Moreover, Henry buys organic products and eats less, but therefore, organic meat.

If you would hear Henry describe himself would you agree with me in thinking that he sounds like a pretty responsible environmentalist? At the very least, Henry himself is very likely to think so.

What you do not know about Henry is that he lives in a big house that consumes a lot of energy to heat during winter. He lives with his family in a suburb, but both Henry and his wife work in the city, so they have two cars to drive to work every day. Once or twice a year the family goes on vacation, flying off to some sunny place to relax. Their washing machine is also pretty old and consumes a lot of energy and their TVs are always on standby, as well as the coffee machine.

Now that you know these facts you might not think of Henry as such a great environmentalist after all, even though he himself is still very likely to perceive himself as such.

NEXT POST: The Road to More Energy Use is Paved with Increasing Wealth

Now, the first reason is that Henry and his family do not know that their overall behavior is not as environmentally friendly as they think. Like shown in the previous post, only a small portion of Europeans feel very well informed with regards to climate change, even though you may think that Europeans should be very well informed, and as such, actually behave more environmentally friendly.

For this article, I went online to find the average ecological footprint of a European individual. This task was harder than it sounds since I mostly ended up finding carbon footprint calculators that take minutes to fill in, or statistics from dubious websites that all show different numbers. As an average person who has little to no insight, how do you know what information to trust?

In fact, it turns out that you must be highly motivated to actually seek information about climate change and your own personal carbon footprint, which truthfully only applies to a small segment of people. It has been shown that news media is the primary distributor of information with regards to climate change to the public. As such, I browsed through the climate change section of several news outlets, including the Guardian, Süddeutsche Zeitung and el País, which are large quality newspapers in Europe. Just going by headlines, only a few of the articles were related to the individual impact of humans on climate change or proposed a different lifestyle.

“I shower once a week. Here’s why you should too” or “Solar cars might be impressive. But vegan diets are better for the planet” are headlines from the Guardian that suggest lifestyle changes. But is it really realistic that people change from showering every day to once a week, or from eating meat several days a week to going vegan?

A study has shown that the behavior of people with pro-environmental attitudes is related to actions that they can easily include into their daily lives. Such actions include recycling, using less plastic, or buying organic food, whereas they do not have a big impact on behaviors that would be costly for people like transport or energy use. So, the second reason for why people behave less environmentally friendly than one would think relates to the fact that people only change behaviors that are easy and not “costly” to change. As a result, such changes in behavior also have less impact on reducing their individual carbon footprint[1].

Consequently, governments and the media need to become aware of their responsibility to inform the public of the impact of their individual behavior as well as find ways to relate the abstract topic of climate change in order to motivate the necessary lifestyle changes. Being confronted with the information, it could lead the “environmentalist” Henry to realize that he is not as environmentally friendly as he thinks, and thus, also giving him the opportunity to change his behavior.

Melissa Strassner is a graduate student in political communication at the University of Amsterdam and has a background in political science with a minor in law. Before writing for Viissi she spent a year abroad in Spain, interned at a local newspaper and at the European information center in Berlin. Her special interests are European and German politics and communicating climate change and sustainability to the public.

Part 1/6: The Dissonance of Climate Change Attitudes and Environmental Behaviour

Part 2/6: I Recycle. Therefore I am … an Environmentalist

Part 3/6: The Road to More Energy Use is Paved with Increasing Wealth

Part 6/6: Changing People is not Always Easy… But it can be Fun